“The Tower!?!! Aieeeee!!” That used to be my immediate response upon seeing this card, even to the point that it would affect the rest of my day, wondering what was coming to throw me off! It’s not hard to see why: the card image shows two people being thrown from a tower, the roof of which has been blown off by a strike of lightning, and everything is up in flames. The truth in this card’s message, though, lies in the fact that this is a necessary blast: when we become too comfortable in our patterns, especially in the ones where we’ve created comfort where there is none to be had, we close ourselves off from new possibilities and opportunities to expand and grow as people! When we’re forced to admit that parts of our lives are in ruin, then we can really look at what is not working and begin the work of finding ways to rebuild and reconfigure those realities, recreating them in ways that are much better for us and truly comfortable.

I find it interesting that my deck has thrown me two “difficult” cards in a row – the 7 of Swords yesterday and The Tower today! And both numerological 7s, a number I’ve been noticing a lot lately. For me, 7 represents perseverance, examining a situation in such a way that you fully understand your place in it and thus are able to stand your ground, holding true to your own beliefs even and especially when it’s a struggle! This is no easy feat, and one that I’m sure is lifelong. But if The Tower has taught me anything, it’s that humongous change is good! After the debris has settled, you’re able to see what’s left, and more importantly, what is truly valuable to you, allowing you to move forward unburdened but that much richer for realizing what is real to you, and what you can count on to remain stable in your life even when everything else seems to be in total disaster mode.

The Tower is actually one of my Birth Cards – a reoccurring theme in my life that leads me to understanding my life path. Yay? Finding that out helped me a lot in coming to terms with this card’s message, which is finding inspiration in the lowest and most difficult times, and learning to trust that the Universe is doing positive work when the structures we rely on appear to be destroyed. I see this card now as a sort of “roller-coaster” ride: something huge is coming up, and your best bet is to hang on tight and just ride it out! There’s no use trying to stop it, and ultimately, things will settle down and be fine again. If I’ve learned anything from my study of tarot, life is a big cycle with constant reoccurring themes! Each time they come up, we get a better handle on how to regain our grip the next time we feel like we’re losing control of our circumstances. Being able to stay grounded doesn’t keep the difficult things from happening, but it does make it easier to realize when to let yourself be swept away, trusting that you’ll come out okay on the other side!

Today’s Shadow and Higher Self cards (the cards at the bottom and top of the deck, respectively) are the 6 of Cups and The Sun, which indicate that today’s “Tower” message may have something to do with our personal sense of nostalgia – memories from the past will come up, reminding us how we used to feel and also how we expected to be feeling now! Don’t let these feelings get you down, and instead draw inspiration from them, even tweaking your circumstances to better fit that youthful vision, if you can! The Sun as the Higher Self card assures that whatever excitement flares up today, it’s ultimately contributing to your greatest happiness: know that you’re still on the right track even if you seem to have gone off-course, and know that today a divine opportunity will come in an unexpected form to shake things up in a positive way! 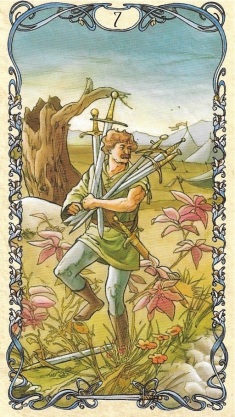 Ah, the 7 of Swords. This is a card that I often struggle with – it’s long been one of my least favourite in the deck! Through my practice, though, I’ve come to learn that the messages we least want to receive are the ones we most need to hear. The 7 of Swords came up as my “theme” card for 2017, and here it is again today, asking me (and you!): where can I be more honest with myself today, and in my life in general?

In this card’s image, we see someone apparently sneaking away from an enemy camp, carrying five swords in his arms. He has one sword that’s actually his, and – oops! – in his haste to get away unnoticed, he’s dropped another one. While his intentions are good – he’s taking the swords so the enemy can’t fight – really, his actions are putting everyone involved at a disadvantage: the “enemy” can no longer take any action at all towards a solution, and in stealing the swords (and dropping one) our protagonist has been deceitful and will certainly be found out. While the conflict that started it all was unpleasant, the choice to be dishonest creates a new level of struggle, and one that can only be resolved through admitting the wrongdoing and returning agency to everyone involved – each needs their own sword. It is so important to consider every perspective when deciding on a course of action!

As you go through your day, do you ever notice yourself going against the little voice in your head, then wish you hadn’t? At that point, do you even wonder *why* you didn’t listen? That was the 7 of Swords voice speaking: that bit of ego that assures you everything will be fine if you take matters into your own hands. The truth is, we’re never acting alone, either in terms of the other people in our lives whom our decisions directly affect, or in terms of our Higher Selves where that initial little voice comes from. The lesson in the 7 of Swords is to listen to that voice, learning to be honest with yourself and your world from the inside out! You always know the right thing to do, it’s a matter of choosing which little voce to listen to. The trick is hearing the softer voice, the whisper of truth, over the much louder and easier to follow ego-voice. The 7 of Swords is the decision between taking time to think and communicate, or acting now and dealing with the repercussions. Either way, you must be honest with yourself about the outcome you chose in that decision-making moment! 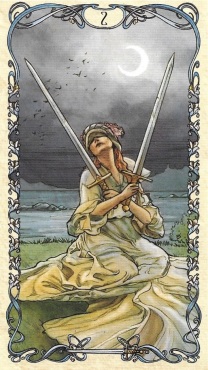 I like to read the “Shadow” and “Higher Self” cards after shuffling for a reading, as they tend to provide some deeper insight into the message being read. With today’s 7 of Swords we have the 2 of Swords reversed and the 2 of Pentacles: today, being honest with ourselves and others will help us loosen the grip we’ve had on our “alone time” lately, that feeling of being closed off and not even wanting to connect outwardly. This was important at the time because we were all going through some deep and dark mental currents, but now everyone is feeling better and ready to reconnect. Indeed, while we felt like we were losing our footing really we were learning to regain our balance in unfamiliar surroundings. Being honest about our needs, especially in terms of support in the physical/material realm, will help us find that balance and begin working towards feeling a little less burdened, like we can manage even when our hands are full! Today we are asked to look at what is occupying us, whether we can delegate any tasks and responsibilities, and most importantly, what needs to be admitted in order to truly move forward to a place where communication lines are open and everyone is feeling “heard.”

It’s time to come back out into the light of day! Admitting where you’ve been wrong will allow you to make a new start, one which finds you standing tall once more and receiving the help you needed all along. We have to address the things we don’t like before we can truly enjoy the things we do! It won’t be easy, but after the initial pain of “getting out of your own way,” you’ll find everything falls into place far more easily than trying to manage everything on your own!